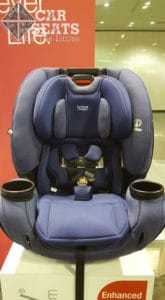 This short article was a preview of the seat prior to it being released.  We’ve got a full look at the production version of this seat available in our One4Life review!

We’re pleased to take a sneak peek at a pre-production model of Britax’s first entry into the multimode section of the car seat shelf — the One4Life, which was introduced at the 2019 JPMA show in front of the world and a few very excited CSFTL team members. This multimode car seat rear faces from 4-50 pounds, is a forward facing harnessed car seat with a weight range of 22-65 pounds, and has a booster mode that goes from 40-120 pounds.

The pictures we’ll use in this preview are all of a pre-production model. The model we’ll see on actual store shelves later this year will include key basics like labels and slight changes to a few parts of the seat. But for now, let’s check out the One4Life’s many notable features.

Since the seat we saw at the JPMA show is a pre-production model, the final measurements on the seat that arrives in stores may vary slightly. But here’s what we’re seeing today! Seasoned Britax-owning families and CPSTs alike may share our great delight in seeing that the ClickTight release mechanism is more like the one found on the Frontier (which has two buttons to squeeze) than the slightly quirkier version that’s found on the ClickTight convertible seats (which has a small dial to turn while sometimes also pushing down on the release panel). The One4Life features an anti-rebound bar. This bar helps to reduce the ride down time when the One4Life is rear facing and offers the additional benefit of providing more rear facing legroom.

If we were handing out awards for easiest anti-rebound bar to use, the One4Life would be at the top of the list. 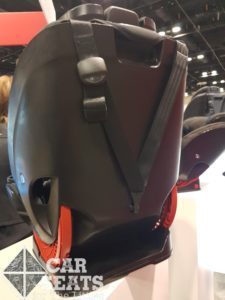 The One4Life includes the Versa Tether that we’ve come to expect from Britax car seats, however this version has a different release mechanism than we’ve seen on other Britax seats. From our limited testing on the show floor, we learned that this mechanism is a lot easier to use!

The top tether stores in a very visible spot on the back of the seat’s shell. So many caregivers skip this critical step in car seat installation (did you know that using the top tether can reduce head excursion in a forward facing child by 6-8 inches??) that we’re thrilled to see it pretty much shouting at you, demanding to be used.

Smooth Shell and Base The One4Life’s base and the back of the shell are quite smooth. This could make the seat easier to install in vehicle seats with contours. The flat base can also contribute to easier installs in some seating positions. Of course, we can’t wait to test this ourselves! 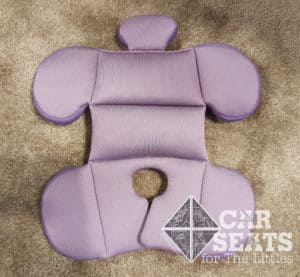 The One4Life includes a robust set of infant padding that can help a preemie fit into the seat. It also looks a bit like a turtle, with a small neck support at the top that we hear works quite well.  As always, we suggest that caregivers confirm the fit on their child before heading out for a ride.

This reinforced crotch buckle pad isn’t a new Britax feature but it’s one we’re very fond of. The crotch buckle falls forward when the child isn’t in the seat so it’s easier to load the child into the car seat when it’s time to head back out. Unlike the ClickTight convertible car seats that include standard lower anchor connectors, the One4Life includes premium push button lower anchors that store in a clever spot on the seat pan. We’ve spent more time thinking about and writing about booster seats than we care to admit so it’s not shocking that the first thing we asked about was the shoulder belt guide. This seemingly simple piece of a booster seat (or in this case, of booster mode) can make a huge difference in how well the seat fits an actual child and how well the vehicle seat belt retracts back into the vehicle.

The One4Life’s shoulder belt guide is set into the headrest, which is curved in a bit. The engineers we spoke with shared that they’d tested the retraction in a wide range of vehicles, with excellent results! We can’t wait to put this booster mode to the test when we review the production model of the seat. Now, there’s no way to guarantee that this seat solves this particular problem for every vehicle, however. When the One4Life’s headrest is fully extended, it’s recessed just far enough from the seat’s shell that in many of the vehicles the engineers tested, the vehicle headrest did not interfere with the seat. In a world that’s filled with more and more fixed-position vehicle headrests, this small yet large thing can make a huge difference! The One4Life has 9 recline positions. The seat adjusts easily between those positions with a single button on the back of the seat’s shell. Unlike almost every other car seat with adjustable recline, this mechanism requires only one hand to adjust.

When the One4Life hits the store shelves, we’ll take a closer look at all things One4Life. Until then, we hope you’ve enjoyed this preview of a pretty promising new multimode car seat!