In our article, Choosing a New Vehicle, we talk about how to find the best features for your family when you’re searching at a dealership for a new car.

But not everyone can run out and get a new NEW vehicle.  Many of us are buying used cars.  Some a few years old, some a bit older, and some of us are going even further and delving into the “classic” realm.  Car seats and cars in the 21st century have been like cell phones and computers — they’ve taken huge leaps in relatively recent years.  So even going just a little older can mean that you’re running into issues with safe riding for adults or older kids, or placement for forward facing harnesses.  What should you look for when considering a used vehicle? We talk about top tethers a lot.  They’re vitally important for every forward facing harnessed child.  It may surprise some people to hear they weren’t required before the 2001 model year.  Yes, 2001 was a while ago, but it’s not *that* long ago, and most of us consider a 2001 car a modern car.  Even a late 90s or 2000 car.  But you may buy it and find you haven’t got top tether anchors.

Since it’s been many years since this requirement was introduced, many vehicle manufacturers are running out of spare parts to retrofits tether anchors.  If you’re looking for a used vehicle, try to get a 2001 or newer if you’ll need forward facing top tether anchors.  It’ll make your life easier to not have to track down possibly impossible spare parts.

Toyota and Honda seem to have tether retrofits that are still easy to get, but GM/Chevy has completely discontinued their program and have nearly used up available stock, Ford is starting to run out, and Dodge/Chrysler/Jeep is right behind.  If you have a car that was made before 2001, a technician who owns a teal colored LATCH manual can help you find out if your car can get a tether retrofitted, and ideally if not, options to keep your child safe without having to buy a new car (such as rear facing until a mature booster age). 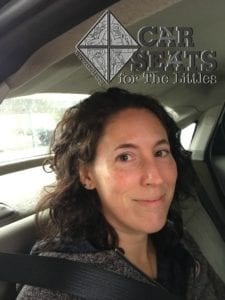 An adult in a seating position without a vehicle head restraint

It’s amazing, but even today, rear center vehicle seat head restraints are not required.  They’re frequently there, but not always.  Some are built into the vehicle backseat so they don’t impede a driver’s visibility — this type of head restraint doesn’t adjust.

Please, look for head restraints in the rear seat of a vehicle.  Starting in 2010, they were required in the rear outboard seats, so that’s a good benchmark year for at least two of the three rear seating positions many vehicles have.

Older vehicles without head restraints offer a higher risk for whiplash.  All adults, five-stepping teens, and kids in backless boosters need support from the car to the top of their ears for whiplash protection.  So look for head restraints wherever you think a child or person will be riding in this car.  Keep this in mind even if you have young kids.  They’ll be bigger kids some day, and not being able to move them around where you want them, or not being able to safely have a third friend tag along, may be a deal killer.

This is another one that seems to sneak up on people and jump out and scream BOO when they realize how relatively recently they were required.  For the 1996 model year cars in the United States (our Canadian neighbors still don’t have this requirement, but thankfully most vehicles don’t undergo drastic changes when crossing the border, so Canadian vehicles generally follow the same rules as American vehicles when it comes to locking seat belts) were required to have vehicle seat belts that locked before a crash for car seat installation.

Often there was already one seat belt in the back that locked –the lap only belt with a tail that you pulled tight.  But for the outboard seats, it was expected that parents would simply use a locking clip for every installation.  Oh, how far we’ve come in since then!

Today’s caregivers cannot fathom the annoyance that was a late 90s car, a late 90s car seat, and a locking clip.  Combine that with no top tethers (for our Canadian neighbors, they were required by law starting in 1989, so you had us beat here!) and it’s quite understandable why so much has been done in recent decades to make car seats easier to install.

Even though seat belts were required to lock starting in the 1996 model year, the car manufacturers were left to decide exactly how that would happen.  We cover these more in depth in our Lock It Up article.  The usual options for American made cars in the late 90s and well into the first decade of the new century was to have the seat belt lock at the buckle.  For a lap and shoulder belt like this, usually nothing was done from the installer’s perspective.  Buckle, add weight, pull tight, and the seat is done.  With a lap belt they usually also locked at the buckle, but often had a tail you pulled tight.  European and Asian made cars generally had seat belts that locked by pulling the shoulder portion all the way out slowly and gently to switch modes from emergency locking mode to automatic locking mode.  Some seat belts just locked every time they were pulled out.  Saab and Volvo had seat belts that locked at the buckle, but a switch used to change the buckle from adult mode to car seat mode.  They were very easy to use, but far less common and only used for about five years. 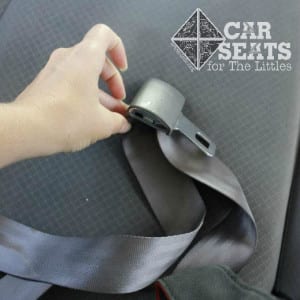 The idea behind it at the time was to simply keep the occupant from leaving their seat and either going into the windshield or being ejected from the vehicle.  And to their credit, they will keep an occupant inside the vehicle.  They are great for installing car seats for the same reason.  But lap only seat belts are not safe for children who are riding in booster seats, young adults  who pass the Five Step Test, or adults.  While a lap only seat belt will keep someone from being ejected from the vehicle, they offer no upper body protection.

When Nils Bohlin, who was working for Volvo in 1959, invented the modern lap and shoulder belts that were added to vehicles, the death rate in vehicle crashes dropped dramatically.  By having a lap and shoulder belt the upper body stays in position more and there are fewer spinal, facial, and head injuries.  Until the 2008 model year, cars were still allowed to have a lap belt only in some positions (usually the center seating positions).  These are good for harnessed seat installations, but nothing more.  Every booster seat on the market forbids this seat belt as an option for use.  So when searching for a used car, these can still be found in cars that are under 10 years old.  Combine the lack of upper body protection with the lack of head protection also not required before this year in the rear seats, and you can have a deadly combination.

While there’s no single age of a vehicle where you should replace seat belts, starting in the 10-15 year old range it’s recommended to start having your mechanic check over your seat belts while the car is in for an inspection or routine visit.  Over the years use can cause fraying or fuzzing that may become a concern.  Parts can simply wear down from use.  Food and beverage can be spilled, causing a seat belt to stiffen or weaken over time.  And of course any seat belt that was in use should be replaced after a crash.  Follow your trusted mechanic’s advice on when to replace a vehicle seat belt.  If you’re buying a car that’s in the 10-15 years old  or even older, ask the mechanic to check over the vehicle seat belts, retractors, lower anchors, and top tether anchors before you give the final ok to purchase the car, or as soon as you have.

Starting in 1991, airbags were required for the driver’s side.  They weren’t required on the passenger side until the 1998 model year.  It’s astonishing to think that there are cars with locking seat belts in the back that may have top tether anchors installed, or can be retrofitted, but there’s nothing for the passenger in the front in terms of an airbag.  If you have a car older than 1998 and may have a teenager or adult in the front seat they will not have the protection of an airbag.  Airbags save lives every day.

Used Cars and You

If you can look at a used car that’s been made since 2010 you’ll have fewer stresses in the future in terms of car seat and child placement as your family grows.  However, if that’s not possible, look into a car that’s 2001 or newer so at least you have top tether anchors for forward facing use.  That will get you several years of use for the car before you need to consider replacing it.  If that won’t work, look into a car made since 1998 so any passenger in the front seat will have airbag protection.  If that can’t work, if you have a car made since 1996 you have at least locking seat belts for an easier installation, and ideally you could rear face to a mature booster age, then booster with a high back booster until a safe front seat age (13 years old).  It’s possible to make kids safe in any of these vehicles.  It just may take more time and effort and thought than a newer vehicle.