Let’s pretend you’re going out alone or with only adults (impossible, I know, just bear with me for a moment here). You unlock the car, put your bag on the floor and your bum in the seat. Then you reach for your trusty seat belt, pull it across you, and buckle it. Easy, right?

Here we’re going to go through some other features of seat belts that you might run into in your car seat adventures.

Seat Belts That Can Not Install Car Seats

These types of seat belts are, thankfully, few and far between these days. Seat belts that attach to the door used to be commonplace but are now quite rare. They can’t be used for car seats. Seat belts on vehicle seats that face the back or side of the car or truck are also not for car seats: these positions are not safe for children who need car seats.

Car seat manuals outline these types of seat belts explicitly: if your seat belt is not one of the disallowed ones, your car seat is likely compatible (you’ll need to double check with your vehicle’s manual, though: both the car and the car seat need to say that child restraints may be installed). 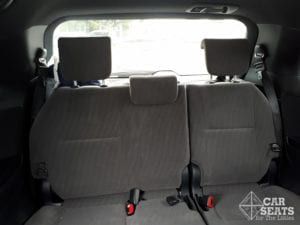 Two seat belts on the sides: what about the middle?

Have you ever hopped in the back of an SUV and wondered where that third seat belt is hiding? Look up! Many SUVs, minivans and hatchbacks feature clever storage for the unused middle seat belt.  These seat belts are just fine for installing car seats, as long as they are properly used. Look up! A seat belt hiding in the ceiling.

The vehicle’s manual will outline how to set up this type of seat belt, but usually the process is something like this: 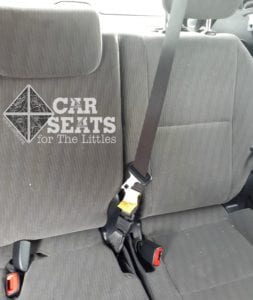 These types of seat belts are fine for installing car seats, but sometimes the extra buckle on the side that allows the seat belt to be stored on the ceiling can get in the way of a secure installation. As always, to be safe, your car seat needs to wiggle less than 1 inch when checked at the belt path.  Not all car seats fit in all seating positions in all cars so it’s possible that seating positions with this type of seat belt won’t work for every car seat. In a car, to protect an adult occupant or an older child in a booster seat, seat belts need to have both a lap and a shoulder portion: a belt that only goes across the lap is not safe for you or me. Thankfully, lap only belts are mostly no longer put in new cars, so we will encounter them less and less.

Lap only belts are, however, fine for installing harnessed car seats.  They can even be rather easy to use because most of them will lock in place when they are tightened. A lap only seat belt can be a great place to install a rear facing car seat. Because crash testing is expensive and takes time, car seat manufacturers are slowly testing their products with inflatable seat belts. Over the last few years, the list of approved car seats has grown and changed.  Our Inflatable Seat Belts article takes a closer look at which car seats can be installed using this type of vehicle seat belt. The adults in my family are of very different heights. When we are shopping for cars, one of the handy features we look for is an adjuster that moves the shoulder belt up and down so that the belt will fit correctly on many different shoulders.

Sometimes these adjusters are also offered in the back seat. They’re a convenient feature for adults, teenagers and older kids in boosters, but they also generally don’t affect the installation of car seats. Check your vehicle’s manual to see if there are any restrictions, but usually you’re good to go.

Some vehicle seat belts include a button that’s attached to the seat belt.  This button helps keep the latchplate in place so it doesn’t drop all the way to the bottom of the belt when the seat belt isn’t in use.  While these buttons offer a bit of convenience for adult passengers, they can get in the way when it comes to installing car seats.

To deal with an inconvenient convenience button, try scooting the car seat over a bit so the button is placed differently in the belt path. You might recognize this lap only seat belt: it’s from a much faster vehicle. Airplanes are great places to install car seats. In fact, the only safe way for children under about 40 pounds to fly is in their car seats. As long as your car seat is approved for use on airplanes, this belt is great for installing forward facing and rear facing harnessed seats. In some airplane seats you’ll need to ask the flight attendant for a belt extension, as the belt release will be difficult to undo inside the belt path. In general, though, car seats and plane seat belts are great friends.

Booster riders, however, will not use their boosters: they’ll need to stow their boosters in the overhead bin or below the seat in front of them for use in the car when they land.

Many Vehicles, Many Types of Seat Belts

There’s good news: the back seat of most passenger vehicles on the road have seat belts that can be used to install car seats. If you’re unsure, check out your vehicle’s manual or contact your local friendly CPST.