When we first published this article back in 2013, it featured a boy named Matthew who is now 6’3” tall and is driving. Does this make us old? We hope not! Since this article has become a staple in our lineup of educational articles and remains relevant seven years later, we’re updating this article to feature another one of our CSFTL models: Kaleb. He’s here to help us explain why bigger kids still need booster seats until they can pass the Five Step Test. 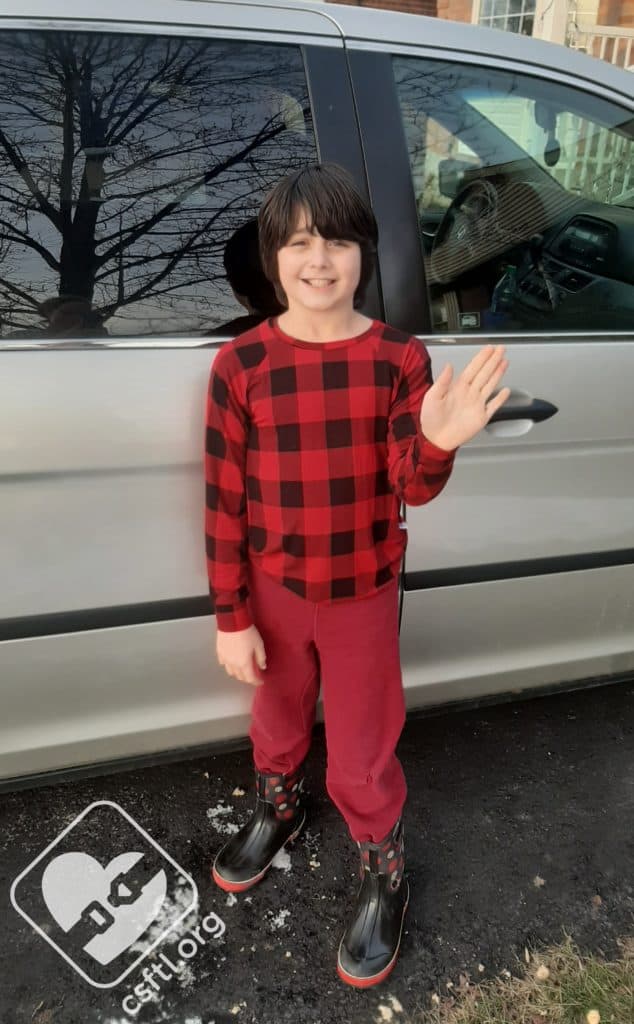 Kaleb is tall for his age. At newly nine years old and 55 inches tall (4’7”) he falls on the 90th percentile for boys his age on the WHO height chart. In other words, in a group of one hundred newly turned 9 year olds, he’d be taller than 90 of them.

Kaleb is from Ontario, Canada, where the law says that children under 8 must be in a properly used child restraint in the car. After the 8th birthday (or once the child hits 80 pounds, or once the child is 4’9” tall), the law allows all children to wear a seatbelt. As long as he’s buckled into a belt, the law says he is safe. Shall we go for a ride, Kaleb?

Fortunately, we know that the law is not enough to keep children safe. NHTSA, Safe Kids, the American Academy of Pediatrics, and Transport Canada  all recommend that children between 8 and 12 years old continue to use a booster until they fit the belt correctly alone, (which usually occurs around 4’9″).

In order to fit the adult seat belt correctly, the following must *all* be true.  (Commonly called the Five Step Test) That shoulder belt isn’t crossing his chest firmly in the middle of his shoulder. It’s touching his neck. Even a very well behaved child is going to get annoyed eventually and push it away. He might even tuck it under his arm or behind his back to be comfortable. We know this leads to brain and spine injuries because the head travels too far in a crash. That lap belt is a bit too high (it’s close but he isn’t quite there yet). There’s a reason it’s called a lap belt and not a belly belt. The lap belt should rest on the hips, going over the tops of the thighs. It shouldn’t cross the soft belly. In a collision, this belt could cause major crush injuries to his internal organs.

He’s uncomfortable. The seat is too big for his legs, so he slouches forwards. Who wants his legs to dangle? Now he’s got a big gap behind him 9 year old – no booster – feet not flat on the floor

When I tell him sternly to sit all the way back, safely, he does. His knees end up bending before the edge of the seat, and his feet are now resting on the heels. How long do you think he can do that before his feet start to ache and he slides back down again?

What Kaleb needs is a booster seat. Boosters are inexpensive and do not take up much space. They are so simple to use that the average older child can put one in the car and climb in and buckle himself without assistance.

Let’s check out his seat belt fit with a booster seat and take a look at those problem areas from before: 9 years old – with a booster seat The shoulder belt crosses his shoulder over his chest, firmly in the middle, without touching his neck or coming off the edge of his shoulder. The lap belt is nice and low, under his hips, resting on his thighs.He can sit comfortably back now because the booster is supporting him, and he can’t slouch because the armrests are holding the seatbelt where it’s meant to be. His thighs are supported so he’s not as likely to have achy feet.

Food for thought: If Kaleb, who is bigger than 90 of 100 kids his age, all of whom the law says DON’T need boosters, and he clearly DOES need a booster, what does that say about all the other 8-9 year olds?

The law is not enough. It’s a starting place, but following it to the letter won’t protect your child from harm. 4’9″ is the size of a 50th percentile 11 year old, not an 8 year old.

Keep your kids in a booster seat until they pass the 5 Step Test. They are more important than the minimums!

Originally written by Joanna Singh, updates are maintained by CSFTL.