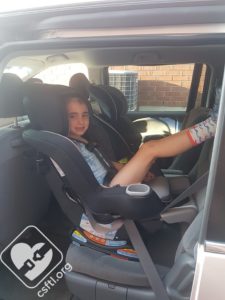 If you’re looking for just the facts about rear facing versus forward facing, you’ve come to the right place. There are multiple factors involved in this discussion; the unique physiology of a young toddler combined with the type of force in the most severe crashes adds up to the perfect storm that puts kids at significant risk if they are forward facing too early.

First, let’s explore the difference in anatomy. Toddlers are not just small adults; their bodies are still developing and those developmental changes make them more vulnerable than an adult. A toddler’s vertebrae are connected via cartilage rather than ossified bone. Those connections are called synchondroses, which are slowly closing over time. There are three major points of ossification, each with two synchondroses. According to a study published in the Association for the Advancement of Automotive Medicine, the first station to close is the C3, second is the axis, and third is the atlas. The results of the study show: This image to the right shows the cervical (top), thoracic (middle), and lumbar (bottom) vertebrae of a one year old (left, each photo) and six year old (right, each photo). Note the easily visible synchondroses in each.

These findings show that before age two, none of the cartilaginous spaces have completed ossification. Those pieces of cartilage have the ability to stretch up to two inches. Yet only 1/4″ stretch is enough to rupture the spinal column, resulting in paralysis or death  (McCall, Fassett & Brockmeyer 2004). Additionally, a child’s immature spine is responsible for supporting a much larger proportion of body weight than an adult’s more mature spinal column. According to Thomas Turbell of the Swedish National Road and Transport Research Institute, “A nine-month-old baby’s head comprises 25% of its total body weight, while in an adult the head weighs 6%… accident research has shown that rearward facing children’s car seats reduce serious injuries by 92%.”  The difference in proportion of head to body only adds to the need to safeguard the spinal column.

Second, let’s talk crashes. According to NHTSA, roughly 60% of vehicle crashes are frontal impacts and 20% are side impacts. During a crash, occupants will travel towards the point of impact, putting all the stress on the neck and spine. At that moment there are actually three impacts: the vehicle striking whatever it strikes, the body of the occupant being retained by the seat belt or harness, and then the internal organs striking the front of the inside of the body. When someone is rear facing, crashes two and three occur in concert and the forces of the crash are more equally diffused along the shell of the seat, holding the neck and spine in line.

The American Academy of Pediatrics recommends rear facing until the convertible car seat is outgrown, based in part on findings published by BMJ Injury Prevention. Decades of data from Sweden also support this recommendation: “children have ridden in rear-facing seats up to 4 years of age for many years, and very low death and injury rates have been documented” (Bull & Durbin, 2008) .


Why the recommendation to rear face until a minimum of age two? Previously, the only data with hard numbers comparing injury when rear versus forward facing were centered around that age group. However, age two is truly a bare minimum. According to the previously noted study, at age three there is still only a 50% probability that the C3 vertebra has finished ossification. The older a child gets, the more time their spinal column has to strengthen and the reality is the longer, the better. Most car seats on the market today will easily rear face even above average height and weight kids until 3-4 years of age. Without a CT scan, there is no way to know what stage of development your child’s spinal column is in, so the safest option is to rear face to the maximum weight or height of a convertible car seat. As time goes on and more older children are rear facing, there will be more scientific data to compare the benefits of a rear facing car seat for preventing spinal injury.

Rear facing is not a choice to be made based on parenting style or opinion; it’s one based on scientific fact. The more we know about physics and physiology, the better we’re able to protect our kids from severe injury as a result of a crash.