The Britax Frontier 90 on the highest harness setting

** Shortly after this mini-review was written, CSFTL had the opportunity to do an in-depth review of the Frontier 90. For more details, you can find that review here: https://csftl.org/britax-frontier-90-an-in-depth-review-and-giveaway/

Today, I had a chance to check out the Britax Frontier 90. This is not going to be the most in-depth review on the web, because my opportunity to check out this seat involved both of my kids (4 years and 2 months) present in the parking lot of a kid’s consignment store, with a CPST friend who graciously agreed to spend her work break letting me take apart her personal seat and install it and bribe said four-year old into allowing me to take pictures with him in it. About halfway through, the four-year old child was trying to drive my car away and the infant child was extremely unimpressed with the situation,  hence the brevity of this blog. Step into my CPST/Mom office…

My son is 4 years + 8 months old and his everyday seat is a Britax Frontier 85. We also own a handful of other popular combination (forward facing harness to booster) car seats, and the Frontier 85 is by far my favorite for comfort and ease of use. I am a big fan of the long belt path installation and how great it is for getting a secure installation. However, it’s not exactly the easiest method, involving a somewhat complex twisty turning journey in and out of the car seat’s frame.

Enter the new Frontier 90 – which has been much hyped in the car seat industry for being remarkably easy to install. I watched a couple of videos when the seat was first introduced, and admittedly scoffed a bit, figuring the videos just make it look that easy. No, really, it IS that easy. I’ve installed hundreds of seats – without a doubt, this one is the easiest I have ever encountered.

I took some photos comparing my Frontier 85 (the blue one) to the new Frontier 90 (the zebra one) just to show some of the differences. However, it’s important to note that these pictures are a little deceiving. Both seats are adjusted to their highest harness setting, however, the Frontier 85 requires a headrest screw to be removed to set it to its highest booster headrest position and I did not remove it for these photos (see previous note about uncooperative children). 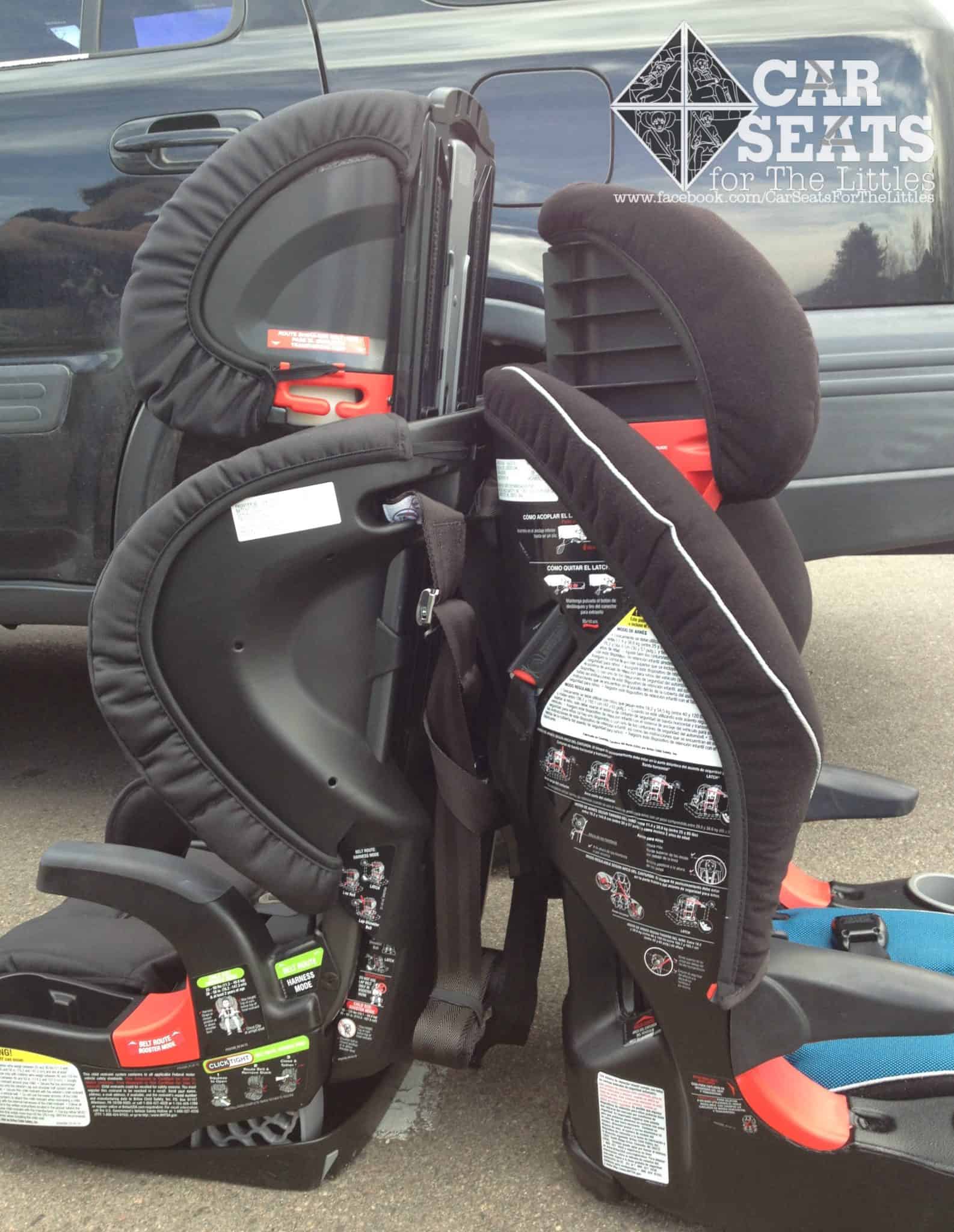 Here’s my son, testing out both seats. He is 4 1/2 years old, 36 lbs, and 41″ tall with a 15″ torso. Both seats are adjusted to their highest position, but remember again he would have several more inches of room in the Frontier 85’s booster mode had I moved it to its full height. The bottom line though – these seats are tall. My son is on the smaller side in the torso especially, but in general the average 8-10 year old can easily fit in the Frontier 90 with its 20.5″ top  harness slots and 90 lb weight limit in harness mode, and 23″ top booster guide and 120 lb weight limit for booster mode.

The thing that makes the Frontier 90 such an easy installation is the ClickTight technology. It is essentially a big lockoff in the back of the seat that simply requires one to open the clamp, thread the seat belt through, and close the clamp. It doesn’t require any yanking or climbing into the seat or sweating or cursing. It really is that easy.

This is what the inside looks like, once you open the ClickTight panel. The LATCH connectors are handily stored down there – but the seat belt installation is so simple, you really don’t even need them. I did both methods of installation and truly the seat belt was much quicker and easier than the lower anchors – usually it’s the opposite! A few major differences from the 85 to the 90, all things I appreciated:

– The harness height on the Frontier 90 can be adjusted from the top of the seat, and can be accessed without uninstalling the seat. The 85 adjusts from the back and the seat must be uninstalled to do so.

– The cover on the Frontier 90 can be removed from the seat without uninstalling it. Makes for easy washing and cleaning!

– The Frontier 85 has a positioning block on the bottom that is required in the front for harness mode and rear for booster mode. The Frontier 90 simply has two recline positions that adjust with a handle on the lower front of the seat. There are two positions – either upright or recline can be used for harness mode, upright must be used for booster mode.

-The Frontier 90 has much longer harness strap covers than the 85 – something I appreciated greatly as my son often complains about the Frontier 85’s harness aggravating his neck if the short strap covers aren’t perfectly positioned.

– When switching to booster mode, it’s not necessary to remove the harness, there are handy storage spots that allow you to just tuck everything out of the way and switch the seat right over. You can also use the lower anchors in booster mode to secure the seat and keep it from becoming a projectile if the seat is unoccupied in a crash.

Things that haven’t changed – both the 85 and the 90 have 9 year life spans, and both have an age and weight minimum to use the seat of 2 years and 25 lbs.

The bottom line? I’m very impressed. Impressed enough to try to convince my husband we need one… but that’s another story!  As a CPST, I see incorrectly installed seats on a daily basis – due largely in part to the fact that many seats just aren’t easy to install properly. It’s exciting to see a manufacturer remove all the guesswork and make things as simple as possible, because an easy to use seat substantially decreases the potential for a parent to make a mistake.

Britax did not sponsor or provide a seat for this review – the opinions are all my own!