The much-loved Graco Extend2Fit convertible car seat has made its way to Canada. While we are still very big fans of this seat and its versatility, there are some major changes between the Canadian and American versions. We’ll use this review to illustrate the differences, most of which are around rear facing use. Graco has stepped up their game when it comes to labeling and the Canadian Extend2Fit is no exception!

The seat labels are colour coded with blue labels addressing the rear facing use and orange labels addressing the forward facing use.  They clearly indicate the recline options, overhang allowance, as well as the recline and panel use requirements. There’s a warning label on the side of the seat that includes the requirement for the cupholders to be installed at all times. There are no restrictions on which reclines can be used forward facing, as long as either 4, 5, or 6 are used.  This allows families to use whichever of these three recline options is most comfortable for the child and installs well in each particular vehicle.

Children who weigh less than 22 pounds:

Children who weigh between 22 and 40 pounds:

Children who weigh over 40 pounds: There’s a very clear orange label that says DO NOT USE the leg extender Forward Facing. The Extend2Fit has a recline indicator on the side of the seat. The ball must be fully contained within the blue at all times rear facing, and fully within the light blue for babies under 3 months old.

The harness, crotch buckle webbing, and chest clip are all standard-issue Graco hardware. Buckling in all of the dolls and my daughter was very easy, as expected. The straps did not easily twist, even moving them around as much as I did for all of these sizes. The headrest adjusted easily through all ten positions, though the flap that lifts as the headrest goes up did get caught under the cover every time I moved it back down. This was quite annoying for me, but most caregivers will not be adjusting the headrest 20+ times a day, so I don’t see it being a large problem.

The inserts that came with the seat are thick and easy to use at the head and under the bum. They both do a good job of supporting a child. The insert under the bum must be removed forward facing, but the insert behind the head can stay in through the life of the seat. If you have a child who appreciates more head support, or a forward facing child with low tone, these may be very beneficial. Grip on the inside of the shoulder strap pads.

The seat has optional strap covers that have a grippy material on the inside.

There are two crotch buckle strap positions. Either can be used rear and forward facing, and Graco requires using the closest slot without the slot being underneath the child. For most of the children we tried in this seat the inner slot was a very nice fit rear facing. Forward facing the outer position worked well for them. Tip: when changing the buckle position, recline the seat AND pull out the extender fully to access the buckle strap. It’ll make life much easier. 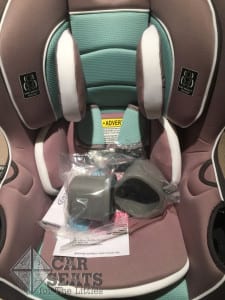 The cupholders come detached, and MUST be added to the seat.

The Extend2Fit includes two cupholders.  Both cupholders must be attached to the seat.  They click in with ease provided they are in the correct direction. They simply won’t fit another way, so it’s not hard to do. 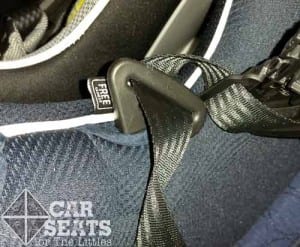 The Extend2Fit includes the Fuss Free pockets for buckle storage when the seat is not in use. That means you don’t need to dig around by your child’s hips searching for the buckle tongue every time you get them in or out.

EZ-Tight UAS – only on the Extend2Fit Platinum

Graco’s SnugLock technology already makes installing some of their seats (though not the Extend2Fit) with the vehicle seat belt a breeze.  Graco has now released their EZ-Tight UAS to make LUAS installation a breeze as well. The first seat to feature the EZ Tight UAS is the Graco Extend2Fit Platinum.

To use the EZ-Tight UAS – route the lower anchor webbing through the correct belt path. Press and hold the release button (labelled with a ‘1’) and extend the webbing. Attach the lower anchor connectors to the vehicle’s anchors, ensuring there are no twists in the webbing. When both anchors are attached, press the button labelled ‘2’ on the EZ-Tight UAS and the excess webbing will retract. Push down firmly on the child restraint and release. Check that there is less than 1” movement at the belt path and, if rear facing, that the recline is within the allowable range. You’re done!

Because the Canadian version of the Extend2Fit only allows the use of recline positions 1, 2, and 3 for rear facing installations, there was initially some concern about how compact this seat would be especially for older or heavier children who require the panel to be fully extended. Graco Extend2Fit in a 1999 Volkswagen Beetle

We installed the Extend2Fit rear facing in a number of vehicles that featured various front to back space, including this 1999 Volkswagen Beetle.  Here the Extend2Fit is in recline position 3 with the panel in position 4. We were unable to install the seat as upright as allowed by the recline indicator without exceeding the allowable overhang of the seat. We were able to install it behind the passenger seat with the passenger seat pushed up and locked into position.

It is unlikely that an adult would have been able to comfortably travel in the front passenger seat with this setup, but the seat fit well and would have allowed a child to ride rear facing for a very long time in this small car. This Extend2Fit is installed rear facing for a child who weighs over 40 pounds.  It’s using recline position 3 with the panel in position 4 in a 2007 Honda Odyssey.

Manual manipulation — pressing down in a slightly different place on the seat’s shell while removing slack from the vehicle seat belt or lower anchors creates a wide range of acceptable recline options.  Here are some typical ways to adjust the car seat’s angle on car seats like the Extend2Fit that allow for a more upright rear facing installation:

Even with the weight-based recline and panel requirements, the Extend2Fit still installs nicely with a wide recline range. Like so many other car seats with a no rethread harness, we found some potential for head slump in the smallest of passengers.  We’d encourage caregivers to try every allowable adjustment to get a proper harness fit on newborns and preemies.  This can include:

Sometimes even a week of growth can make a difference, so the fit issues facing a tiny newborn on their first rides in the car may be resolved quickly. In the meantime, protecting those tiny airways is a critical part of how the child fits in their car seat. This little guy needed a rolled washcloth between him and the crotch buckle to prevent him from slumping.  We removed the head cushion to prevent head slump because it pushed his head forward. He is also using the bottom insert.

We were very impressed by the harness fit for this tiny model. We were able to tighten the straps to pass the pinch test, and they were positioned below his shoulders. We did find that we needed to make small adjustments to get him correctly positioned in the seat. Our second newborn model is 12 weeks old, weighs 8 pounds and is 20 inches long. She achieves an excellent fit in the Extend2Fit Platinum with the head cushion removed and bottom insert used. We were able to position the headrest in the 2nd position for her, as her torso is longer than our previous newborn model This model is 3 years old, weighs 38 pounds, and is 42 inches tall. She normally rides rear facing, so riding rear facing in the Extend2Fit is nothing new to her. She was very vocal about how much she liked the extender panel (used in position 4), and her cupholders. She has requested that she keep this seat “forever” and we take that as a very good sign. This 5 year old model weighs 48 pounds, and is 46 inches tall. He has started booster training in a Graco Affix but was willing to try out the Extend2Fit rear facing and give his thoughts. He was initially unimpressed with “sitting backwards” but after a few rides admitted he was very comfortable in this seat. While we are not advocating that 5 year olds need to ride rear facing, we were impressed that this seat makes rear facing a possibility for big kids or littles with medical issues that make rear facing to the maximum a much safer method of transportation. Believe it or not, our 3 year old model featured above is now 6 years old! She is almost at the rear facing limits, weighing 49 pounds and standing 48 inches tall. While we again don’t advocate that 6 year olds ride rear facing, we DID want to include her in our review to show how the Extend2Fit fits such a wide range of children rear facing – newborn until the stated limits of the seat (which is a such a great feature that it really needs to be highlighted!). She is comfortable rear facing even though she normally rides in a high back booster – and found it fun to ride reclined with her feet up. There are no forward facing recline restrictions on the Canadian Extend2Fit, aside from using reclines 4, 5, or 6. Remember that the top tether must always be used in Canada. Yes, Graco has included that on a label, too! This 5 year old model weighs 48 pounds, and is 46 inches tall. He’s got a little room left to grow in this seat and finds it comfortable. We’ve seen how long-lasting the Extend2Fit can be for children who ride rear facing, but how does it fit forward facing?  Our 6 year old model weighs 45 pounds, and is 46 inches tall. She’s got about a half inch of harness height left above her shoulders.  The Extend2Fit is installed forward facing on recline position 4.

We applaud Graco on not only bringing a seat with high rear facing limits to the Canadian market, but also for making it easy to use and install, and giving it an affordable price point ($350CAD MSRP). The clear labelling makes important information easy to find.

While the Canadian version of the Extend2Fit is not as compact a seat rear facing as its American cousin, it is an excellent seat for tall/heavy littles and will fit in a variety of vehicles. One key consideration is overhang — the allowable overhang is clearly marked on the seat but because it’s a large seat front to back, it’s important to keep overhang in mind when installing the seat.

Our friends at Graco Canada are giving away one Extend2Fit Platinum to a lucky reader.  Read our terms and conditions, then enter below for your chance to win!
a Rafflecopter giveaway