Families going on long trips with small children will often consider a class of vehicle called a Recreational Vehicle or RV for transport, rather than dealing with a cramped smaller car and hotels along the way.

The face value appeal is obvious. RVs allow a certain amount of freedom in destinations, are potentially more comfortable than a car, and make packing easy. Unfortunately, RVs present a unique set of safety challenges for adults traveling with children that may not be readily apparent.

Recreational vehicles, or RVs, come in three classes (A, B, and C) and are basically driving cabs with the living quarters attached. There may not be a barrier between these spaces or any sort of compartment for the driver and passenger. The Class A vehicle, or traditional motorhome, is what we usually think of when we discuss RVs.

Classes B and C are basically living quarters built on truck frames, and tend to have a more sturdy frame, compartmentalization for the driver and are subject to slightly different design and testing standards. Lastly, there are RVs which can be towed by other vehicles, and these are known as 5th wheel trailers, camping trailers, toy haulers, and travel trailers.

Seat Belts in the Cabins of RVs

Seat belts in passenger cars are subjected to a large number of federal regulations and testing.   The seat belts in the cabins of recreational vehicles are not subject to that testing.  Most significantly, the seat belts are often not secured to the frame of the vehicle as is required for passenger vehicles. Instead, they are anchored to the floorboard or plywood directly beneath the upholstery. While they may appear secure and tight, in the event of a crash, those seat belts could easily completely detach from their anchorage.

On the off chance that a newer model does in fact have properly tested and anchored seat belts, a host of other issues will prevent a safe installation in the cabin of a recreational vehicle. Lap only seat belt in an RV

In addition, these seat belts are generally lap belts only. This type of belt is unsuitable for children riding in boosters or older children and teens who pass the five-step test. RVs can also include recliner or easy chair type seats which may have lap/shoulder belts. These seats appear to lock into place, but the vehicle belts are not usually attached to anything other than the seat itself. This type of seat belt may not be allowed by some child restraint manufacturers and the soft, cushiony, and padded seat may also prevent a solid car seat installation.

This couch faces sideways in the RV and folds out to become a sofa bed. The seat belts are simply attached to the wooden frame of the couch and tuck away when not in use. In these seats and the seats at the dining room table, there is inadequate vehicle seat support for adults.  It’s easy to imagine a larger child, teenager, or adult hitting their head on the glass window in the event of a crash or even a sharp turn. There is a front passenger seat next to the driver which can be an appropriate place for a child restraint; it has a lap/shoulder belt and a suitable forward facing vehicle seat. However, the belt may not lock for installation of car seats and it’s unlikely to have a tether anchor for a forward facing child.

The passenger seat is the best option for a forward facing child passenger in an RV. If there is no passenger airbag, it might also be suitable for a rear facing car seat.  If you have more than one child in the vehicle, you’d be left with making tough decisions, so the best option is to travel in another vehicle.

Legality of Transporting Children in an RV

The majority of states in in the United States require proper use for child restraints.  For RV travel, this means the following: when a seat is not installed in accordance with the manufacturer’s instructions on a forward facing vehicle seat that has properly anchored seat belts it is de facto illegal to transport your child in the vehicle.

And even if it were legal, it remains unsafe.  Because of this significant safety risk with installing car seats in RVs, CSFTL advocates against RVs for family travel.

The inside of an RV has everything from cabinets, food, and appliances to the kitchen sink. While there are some versions of these vehicles with most larger parts bolted to the frame, that isn’t always the case.

Cabinets can open when the vehicle makes a turn, and everything inside can get jostled and tossed about. In the event of a crash, there’s a good chance that all of these heavy objects can shatter or fly around. If these objects strike the occupants, severe injuries or even worse could result. Travelling inside an RV presents a significant risk of being injured by a projectile. One exception would be for a Class B or C vehicle, and generally only for the driver and front passenger. Those particular seats are in front of the vehicle, usually in a well of sorts or with a partial wall on either side. That setup can work as a somewhat effective barrier or compartment. 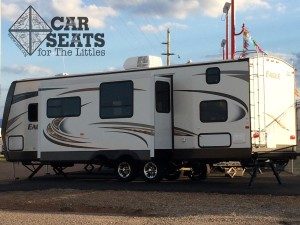 Preferred alternatives to Class A, B or C vehicles are the travel trailer and 5th wheel RVs. These types of RVs are towed by a vehicle, so passengers ride in the vehicle instead of in the RV itself.

Trucks or larger SUVs can make the perfect vehicle for towing such large items and can provide plenty of safe seating positions for families with children in child restraints. While precautions must be taken to ensure that the RV is being towed properly, these are generally considered the safer option for traveling with children. Camping trailers are smaller, compact “pop up” versions of travel trailers, and are folded down during travel. Toy haulers are similar to 5th wheel and travel trailers, with extended space and ramps for all terrain vehicles and similar smaller recreational vehicles.

Many families, my own family included, have used or are curious about using RVs for family travel. Who doesn’t dream of a long road trip, camping, and adventure on the road? By choosing the appropriate vehicle for your family, or perhaps making arrangements to follow behind or travel separately, everyone can enjoy a trip to the great outdoors.

In September, 2016, the Manufacturers Alliance for Child Passenger Safety (MACPS) published a new statement that definitively discourages the use of motorized RVs for the transport of children. Because of many of the concerns outlined here (seat belts, seat structure and lack of federal testing in RVs) MACPS also recommends parents “choose a non-motorized tow-able RV, so that children can be restrained properly in the passenger vehicle that is towing the RV.” (You can read the entire statement here). MACPS is an organization made up of representatives from child restraint manufacturers; in a usually competitive industry they work together to clarify issues in child passenger safety, and everyone in child passenger safety benefits from the time and resources they have collectively dedicated to disseminating essential information. At CSFTL we are very thankful they have taken the time to clarify their position on Recreational Vehicles!