Travelling with the Britax Frontier

You might also know that there are about a million options and configurations of children, car seats, and travel.  With this large range of options, the right one is the one that works best for you and your family.

For my family, that’s meant travelling with a Britax convertible seat (at least on most of the trips we’ve taken since Littles expanded our family).  However.

My youngest Little has outgrown her Boulevard by height and with a holiday trip to Grandma’s house on the horizon, I returned to stressing about which car seat is the right option for travel.

Despite having access to the lightweight Graco Contender, I boldly decided to take our Britax Frontier 90.  At 25 lbs, the Frontier outweighs the Contender by a good 10 pounds.  And it’s a lot bulkier.  So what would possess me to bring the Frontier instead of a lighter weight seat with a smaller footprint?

In a word: ClickTight.

We’ve had nothing but good things to say about this installation system.  It takes almost all of the guesswork and grunting out of installing seats.  Plus, it allows for installs in seating positions that would require a great deal of sweat equity for almost every other seat.

When the Frontier 90, Pinnacle 90, and Pioneer 70 were released, they weren’t approved for FAA use.  Eventually, Britax received this approval for the seats and issued a retroactive statement allowing airplane use.

However, my Frontier was made prior to that date and it did not come with the FAA sticker.

Things to print if your seat falls into this category:

If you’re better at planning than I am, call Britax for an updated sticker.  They’ll send one out to you.

Note: it’s wise to make this call before 2 days prior to your flight. Our Gogo Kidz Travelmate has served us well over the years.  It’s fit on Britax convertible seats, a couple of Diono Radians, a Graco Size4Me, and once, on a First Years True Fit.  So I was pretty bummed to discover that it doesn’t *quite* fit on the Frontier the way it does on the convertibles.  After a bit of fiddling, I discovered that it fits on the lip just above the base.

This means that I have to recline the seat a bit more as we’re strolling through the airport.  The low profile of the Frontier means it’s not likely that my kiddo will be able to ride in the seat as we stroll through because her legs would be just a few inches off the ground.  She’s 5 now, and mostly cooperative about walking with us so this wasn’t a huge issue, though she was very fond of sitting down in it EVERY time I set the seat down.

Getting Through the Airport 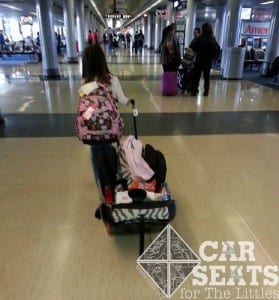 Big Sisters can help ferry the Britax Frontier through the airport!

The bonus here is that it’s one less bulky item to manage as we move through the security process.

Getting Onto the Plane

This is definitely more challenging than getting a smaller, lighter weight seat onto the plane does. When we traveled with convertible seats, I found that carrying the seat over my head while urging my kiddos to find our seats was the most efficient means of travel.  But with such a heavy, bulky seat as the Frontier, this wasn’t an option.  It’s just too heavy and bulky.  Instead, I did a kind of bear hug around the middle portion of seat, peeked over one side, and made my way to our seats.

At least it was a short trip down the aisle.

Once we were in our seats, the Frontier came off of the Travelmate and I stored the cart in the overhead bin.

Getting Into the Airplane Seat This does tend to leave the buckle right behind the child’s back.  Twisting the female end of the buckle stalk a few times can move the buckle away from that area.

The Frontier sits low enough on the seat that my Little was able to put her tray table down on the airplane. This is a huge plus for us because she loves to arrange things on that tray while we fly. The Britax Frontier is wider than the airplane seat

On the minus side, the Frontier is slightly larger than many commercial airline seats.  The Frontier spilled over the edge of my daughter’s seat and into mine.  In the picture at the left, the separation of the seats isn’t visible at all because the Frontier is partially on my seat!  Also, my shoulder got to rest uncomfortably against the upper shell of the seat for our entire journey.

Our second flight was on a smaller, regional jet.  On this flight, the seats were wider so the Frontier fit onto the airplane seat –I didn’t even have to put the armrest up!

Getting Off the Plane

Once we land, it’s always a race to grab things from the overhead, put the Travelmate back onto the seat, put on my backpack, hoist the Frontier up , hugging it in front of me, then herd my Littles off the plane while trying to see around the bulky sides of the car seat without bumping into any other passengers.

No matter how many times I’ve done this, it never sucks less.  At least the walk usually isn’t very long.  Unless we’re at the very back of the aircraft — then we gain a little extra time to gather our items while the entire plane disembark before we do.

After spending most of the day on the plane, we arrived at Grandma’s.  The big moment was here!  It was time to install the Frontier in the car.  Two seconds later, all of the hassle of traveling with such a heavy seat was worth it because the seat was installed properly and we were ready to go.

I realize that this is a very short sentence that is not proportionate to the relief and awesomeness of installing the seat so quickly and easily.

When I told the team at CSFTL that I was planning to take the Frontier on this trip, many of them looked at me like I was perhaps not thinking clearly.  But I recalled the struggles that I’ve had installing seats while the entire family waited in the heat or in the cold and I thought it was time to take a chance on a different solution.

Taking a seat as heavy as the Frontier on an airplane trip wasn’t my first choice, only because of the size/weight of the seat.  However, having the Frontier along for the ride front-loaded my frustrations because once it was time to put the seat into the car, it was like magic.  Another advantage is being able to easily move the seat between cars once we arrived — sometimes my kiddo wants a ride home with Grandpa or another family member and now I’m able to say sure!  I’ll just put the Frontier in that car real quick.  The convenience of being able to install a seat properly and quickly without much sweating or grunting was totally worth the effort!