“Longest lasting seat on the market!”

“The last seat you’ll ever need!”

These phrases are music to a frazzled parent’s ears: researching and choosing a car seat is confusing, time-consuming and the idea of doing it all over again in a few years (or months!) can make even the most calm and collected of parents want to sell their car and move to the city. But sadly, car seats are not one size fits all, and marketing claims aren’t all they’re cracked up to be.

So why isn’t there one answer? Why isn’t a single rear facing only (infant) or convertible or multimode seat the longest lasting of its kind on the market? The answer, in a familiar phrase, is that kids come in all shapes and sizes. In North America, all car seats have weight and height limits as well as other fit limitations. A seat will be outgrown when a child meets the weight or height limit, or when she ceases to fit, and one of those will come first. When she meets that first limit, the seat is outgrown, no matter the other limits. Take, for example, Graco’s Snugride Click Connect 30. This is a rear facing only seat that fits newborns. It’s a popular seat for first time parents, and for good reason: it’s convenient, widely available and fits in a wide variety of cars. One of the reasons for its popularity, however, is that “30”: the weight limit for this seat is 30 lbs. Lots of people, understandably, look at this high weight limit and think they’ll be using this seat until their child is, or is close to, 30 lbs (the weight of an average two and a half year old). This goofball does NOT fit in his baby sister’s seat, despite being within the weight limits!

The problem with this reasoning is that the Snugride also has a height limit of 30″ as well as the fit restriction that the child’s head must be within 1″ of the shell. Nearly all children will reach 30″ long before they reach 30 lbs (30″ is the height of an average 12 month old) and depending on their torso length, their heads may also reach within 1″ of the top of the shell before they are 30″ and long before they are 30 lbs.

So as you can see, most babies will outgrow their rear facing only seats long before a safe forward facing age, as well as long before the weight limit stated on the box. Once babies outgrow their rear facing only seats, they need to move to convertible seats to stay safely rear facing until age 2 at a minimum. Here’s perhaps the most common moment when parents look for the highest weight or height limits possible in the hopes of never ever again spending an evening down the car seat internet shopping rabbit hole.

Unfortunately, a convertible or multimode car seat also can’t be judged by its height or weight limits alone.

Some car seats have an overall height limit that will be reached before any other limit; many of the more affordable seats will be outgrown rear facing when the child reaches 40″ overall height, which often comes before the 40 lbs weight limit. The good news is that 40 lbs is average for a child over four and a half, and 40 inches is also average for a four year old, so a 40″ and 40 lbs rear facing limit is perfectly adequate. Take, for example, the Evenflo SureRide, a seat pretty much guaranteed to get all children to 40 lbs or 40″, whichever comes first. Some seats, however, will be outgrown not by the numbers stated on the box, but by a fit or usage restriction. Most seats require that the head must be either even with or within 1″ of the shell while rear facing: this depends on a child’s torso to leg length ratio, which is very hard to predict ahead of time. Some seats have other restrictions, for example, the Evenflo SafeMax which requires that only the bottom three headrest positions be used rear facing, meaning that many children fit very poorly long before they reach the overall height or weight limit. At 37.5″ tall this 2 year old is close to outgrowing the Cosco Scenera Next in forward facing mode since her shoulders are nearly even with the top slots. The stated height maximum for this seat is 43″.

In forward facing mode, many seats are outgrown not by the overall height or even weight limit on the box, but by the (very important) fit restriction that the child’s shoulders must be under the straps at all times. Because a child’s torso growth can be hard to predict (a very tall child could be either very leggy or all torso) this one tends to flummox parents who bought a convertible seat thinking it would last until the child reached the weight limit on the box. This 2 year old has much more growing room in the seat on the right, as both seats will be outgrown when his shoulders reach the top harness height.

Compare, for example, the Evenflo SureRide and the Clek Foonf. Both seats will be outgrown at 65 lbs, but the Foonf has 17″ top slots, while the SureRide has 19″ top slots. Two inches of torso-only growth in an older child could be an enormous amount of time, so for forward facing, the SureRide (which retails for around $100) will last much longer than the Foonf (which retails for $500).

This comparison can come as even more of an uncomfortable surprise for seats that have a higher weight limit. The Maxi-Cosi Pria, for example, has a 70 lb weight limit (and another version with an 85 lb one), but shares a 17.5″ top shoulder slot with its 65 lb weight limit cousin, the Maxi-Cosi Vello, rendering those extra 5 lbs irrelevant for most kids.

When considering a multimode car seat for a baby, the limits can be even more confusing. For a seat that converts from rear facing to forward facing to booster, the upper limit of the entire seat will be the limit of the seat in booster mode. So even though theoretically a seat like the Graco 4Ever can be used until the child is 100 lbs, the harness capacity of the seat is not that high: for some children the harness will be outgrown by height before the child is ready to ride safely in a booster (age 5 or beyond). 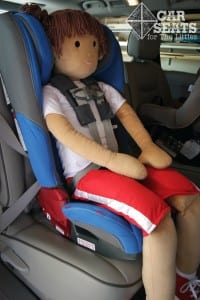 At 6 years old, 46 lbs, 48″, Chloe the doll is nearly at the maximum for the harness in the Diono Ranier, though she is nowhere near the stated maximums and not big enough for booster mode.

To complicate things, some seats marketed as rear facing, forward facing and boosters don’t make safe boosters at all. The Diono multimode car seats, for example, can’t be used in booster mode until the child is 50 lbs, at which point the shoulder guides do not offer a safe belt fit in booster mode for the majority of children. The widely panned Alpha Omega Elite doesn’t fit well as a booster at all, though the outside of the box claims it will be the last seat you’ll ever need. It simply isn’t, ever, the last seat you’ll ever need.

Car seats are confusing, expensive, and terribly important. These factors together have driven more than one smart, concerned parent to eat or drink things she really shouldn’t. When shopping, it’s important to read the fine print, not just the limits on the box, but it’s also essential to remember that choosing a seat that fits your child for now and the near future is fine. Kids grow in strange and unpredictable ways, and since most kids will need child restraints in the car until they’re age 10-12, it’s OK to buy more than one seat (in that time period, many families will buy more than one car!).